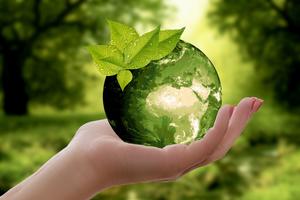 One of the greatest challenges to contemporary religions is how to respond to the environmental crisis, which some believe has been perpetuated by the enormous inroads of materialism and secularization in contemporary societies, especially those societies arising in or influenced by the modern West. Others such as the medieval historian Lynn White have suggested that the emphasis in Judaism and Christianity on the transcendence of God above nature and the dominion of humans over nature has led to a devaluing of the natural world and a subsequent destruction of its resources for utilitarian ends. While the particulars of this argument have been vehemently debated, it is increasingly clear that the environmental crisis presents a serious challenge to the world’s religions. This is especially true because many of these religions have traditionally been concerned with the paths of personal salvation that frequently emphasize other worldly goals and reject this world as corrupting.

How to adapt religious teachings to this task of revaluing nature so as to prevent its destruction marks a significant new phase in religious thought. Indeed, as the historian of religions, Thomas Berry, has so aptly pointed out, what is necessary is a comprehensive reevaluation of human-Earth relations if the human is to continue as a viable species on an increasingly degraded planet. In addition to major economic and political changes, this will require adopting worldviews that differ from those which have captured the imagination of contemporary industrialized societies that view nature as a commodity to be exploited. How to utilize the insights of the world’s religions is a task of formidable urgency. Indeed, the formulation of a new ecological theology and environmental ethics is already emerging from within several of the world’s religions. Clearly each of the world’s religious traditions has something to contribute to these discussions.

To read more about how each of the major world religions are addressing this crisis, select a tradition from the sidebar on the right.

Each listing includes an essay that provides an overview of that tradition’s engagement with the environmental issue; official statements from religious leaders; engaged projects within that tradition doing hands-on work; and a bibliography for further reading.

The Forum on Religion and Ecology is aware that religious terminology, both historically and at present, is continually being reexamined and changed. We are conscious, for example, that certain religious practitioners or scholars prefer different names for a tradition than those that have ‘ism’ in it. We respect this concern as arising from colonial legacies of viewing religions primarily through the eyes of westerners. For this website, however, we will use the terms that arose from the Harvard conferences and books with respect for the ongoing discussion of this issue.