In addition to this sampling, you can view a YouTube playlist of Hinduism and Ecology videos here.

Spotlights Clips  2.17 ~ Animals in India with Dr. Pankaj Jain
January 17, 2022
This week, Spotlights features a clip from our episode with Dr. Pankaj Jain, Head of the Department of Humanities & Languages and Chair of The India Centre at FLAME University. We talk about the place of animals in Indian religion, culture, and ecology, including questions about vegetarianism, veganism, agriculture, and animal sanctuaries. Details for the full episode are available here: https://fore.yale.edu/blogs/entry/164…

Spotlights Episode  2.16
Dr. Pankaj Jain, FLAME University
January 10, 2022
This week’s episode of Spotlights features Pankaj Jain, PhD, an internationally recognized academic leader in sustainability, Jain studies, film studies, and diaspora studies. He is the Head of the Department of Humanities & Languages and Chair of The India Centre at FLAME University. We discuss connections between dharma and ecology in Hinduism and Jainism, with particular attention to three books by Dr. Jain, Dharma and Ecology of Hindu Communities: Sustenance and Sustainability (Routledge, 2011), Science and Socio-Religious Revolution in India: Moving the Mountains (Routledge, 2016), and Dharma in America: A Short History of Hindu-Jain Diaspora (Routledge, 2019). He tweets at @ProfPankajJain, and his podcast #DiscoverIndia is on Spotify, Apple, Google, YouTube, Gaana, and other platforms. You can also find more information at his faculty website: https://www.flame.edu.in/faculty/pank…

July 26, 2021
This week’s episode of Spotlights features clips from three scholars of Hinduism and ecology, each of whom has a recently published book on that topic. First, we hear from Vijaya Nagarajan, PhD, an associate professor in the Department of Theology and Religious Studies and in the Program of Environmental Studies at the University of San Francisco. She talks about her book, Feeding a Thousand Souls: Women, Ritual and Ecology in India — An Exploration of the Kōlam (Oxford University Press, 2018): https://feedingathousandsouls.com/ Second, we hear from David Haberman, PhD, Professor in the Department of Religious Studies at Indiana University Bloomington. He discusses his latest book, Loving Stones: Making the Impossible Possible in the Worship of Mount Govardhan (Oxford University Press, 2020): https://global.oup.com/academic/produ… Finally, we hear from Christopher Key Chapple, PhD, Doshi Professor of Indic and Comparative Theology and founding Director of the Master of Arts in Yoga Studies at Loyola Marymount University in Los Angeles. He discusses his newest book, Living Landscapes: Meditations on the Elements in Hindu, Buddhist, and Jain Yogas (SUNY Press, 2020): http://www.sunypress.edu/p-6860-livin… Links to full episodes for each guest can be found below: Vijaya Nagarajan: https://youtu.be/3ccC7xjTBK0 David Haberman: https://youtu.be/8llnOY1lFMI Christopher Key Chapple: https://youtu.be/LKRONXyDoOQ

May 31, 2021
This week’s episode of Spotlights is the second part of a two-part interview with David Haberman, PhD, Professor and former Chair in the Department of Religious Studies at Indiana University Bloomington. Last week, we talked about his work with religion and climate change. This week, we discuss his research into the worship of stones, rivers, and trees in northern India, with particular attention to his recent book, Loving Stones: Making the Impossible Possible in the Worship of Mount Govardhan (Oxford University Press, 2020). You can find more information about his work here: https://religiousstudies.indiana.edu/… More information about the book can be found on the publisher’s website: https://global.oup.com/academic/produ…

Youth Climate Justice in India by John Paul Jose
Duke Undergraduate Environmental Union
March 20, 2021
The Environmental Justice Symposium 2021 is happy to present John Paul Jose. Kerala-born John Paul Jose’s journey with environmental activism began when he joined a protest against the Yettinahole project around five years ago. Later, in 2018, John set out to discover what steps India’s politicians were taking to address the climate crisis, as one of the Fridays For Future youth leaders in India. Now 22, he is still a passionate activist, criticising climate action (and the lack of it) from an Indian viewpoint, and especially how global warming affects India’s forests and ecosystems.

February 22, 2021
This episode features Christopher Key Chapple, PhD, Doshi Professor of Indic and Comparative Theology and founding Director of the Master of Arts in Yoga Studies at Loyola Marymount University in Los Angeles. He shares his perspective as a scholar and practitioner of yoga, particularly with regard to the connections between yoga and ecology. He discusses his new book, which explores elemental meditations across different traditions of yoga, Living Landscapes: Meditations on the Elements in Hindu, Buddhist, and Jain Yogas (SUNY Press, 2020). More information about the book can be found here: http://www.sunypress.edu/p-6860-livin…​You can find more information about Hindu, Buddhist, and Jain perspectives on ecology at the Forum Website: https://fore.yale.edu/World-Religions​

Dr. Vandana Shiva on India’s Farmers’ Protests: Indian Farmers Are a Victim Of Food Imperialism
Going Underground on RT
February 13, 2021
On this episode of Going Underground, we speak to Dr. Vandana Shiva, the Founder and President of Navdanya, Technology and Natural Resource Policy who was awarded the Right Livelihood Award, also known as the ‘Alternative Nobel Prize’. She discusses the recent avalanche in Uttarakhand which has left hundreds missing and the causes behind it, how the World Bank’s actions in the 1991 was arguably the start of Indian farmers vs global capitalism, why India’s farmers are organising en masse to oppose Modi’s neoliberal farming laws, 1 in 4 farmers on Earth being Indian, multinational farming corporations and their war on India’s independent farmers, the history of the spread of GMO technology such as ‘Roundup’, why a transition away from industrial farming back to small-scale farming is needed to fight climate change, and much more!

January 4, 2021
This week’s episode of Spotlights features Vijaya Nagarajan, PhD, an associate professor in the Department of Theology and Religious Studies and in the Program of Environmental Studies at the University of San Francisco. She talks about her teaching, research, and activism at the intersection of Hinduism and ecology, with particular attention to her book, Feeding A Thousand Souls: Women, Ritual and Ecology in India—An Exploration of the Kōlam (Oxford University Press, 2018). You can learn more about her book here: https://feedingathousandsouls.com/ More information about Hinduism and ecology can be found on the Forum website: https://fore.yale.edu/World-Religions…

Towards an Anti-caste and Abolitionist Epistemology for Environmental Justice
Dartmouth College
October 28, 2019
This talk, offered by Malini Ranganathan of American University, considers the relationship between colonial history and contemporary struggles around caste identity and environmental outcomes in urban India.

Dr. Vandana Shiva Delivers Parliament Keynote Address
Parliament of the World’s Religions
October 16, 2015
On World Food Day of 2015, Dr. Vandana Shiva, Hindu author and environmental justice activist, addresses the Faith In Women plenary at the Parliament of the World’s Religions. Dr. Shiva centers women as not only the true seed keepers and food producers of the planet, but also the true faith keepers—and thus the most critical protectors of the planet during climate crisis.

“Troubled Waters: India’s effort to clean up sacred but polluted Ganga River”
PBS Newshour (February 11, 2020)
The Ganga River, known as the Ganges under British rule, is one of the most revered waterways in the world, yet also among the most polluted. PBS reports on the challenges of  India’s efforts to clean up the river and restore its natural flow. 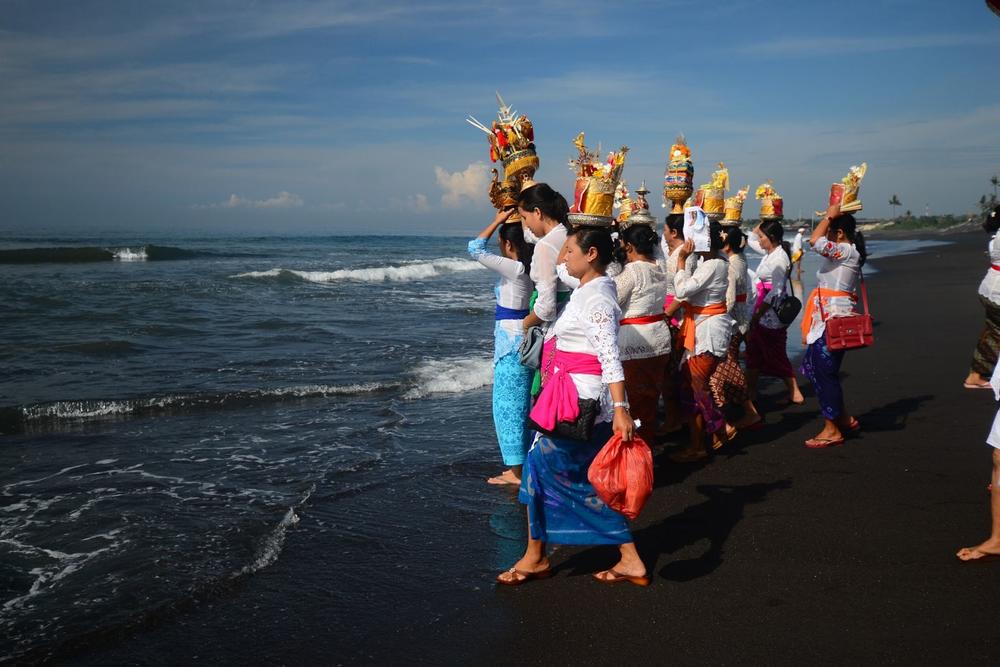