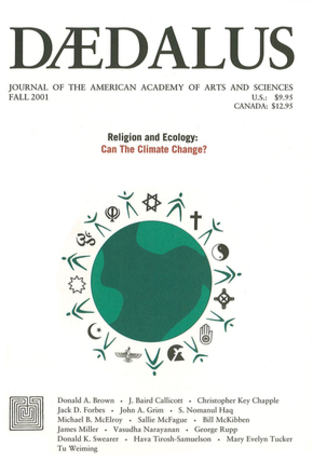 The fall 2001 issue of the journal Daedalus focuses on interdisciplinary issues regarding religion and ecology that specifically relate to issues raised by global climate change.

See the list of the articles contained in this issue below.

For more information about the  issue and to read the full text of all of the articles contained therein, go to the issue page on the American Academy of Arts and Sciences site.

Daedalus is the journal of the American Academy of Arts & Sciences. Drawing on the enormous intellectual capacity of the American Academy of Arts and Sciences, whose members are among the world’s most prominent thinkers in the sciences, humanities, arts, and social sciences, as well as the professions and public life, each issue of Dædalus features multidisciplinary, authoritative essays centered on a theme or subject.

Essays in the issue:

Introduction: The Emerging Alliance of World Religions and Ecology

Perspectives on Environmental Change: A Basis for Action

Nature in the Sources of Judaism

Islam and Ecology: Toward Retrieval and Reconstruction

Water, Wood, and Wisdom: Ecological Perspectives from the Hindu Traditions

The Living Cosmos of Jainsim: A Traditional Science Grounded in Environmental Ethics

Principles and Poetry, Places and Stories: The Resources of Buddhist Ecology

The Ecological Turn in New Confucian Humanism: Implications for China and the World

Envisioning the Daoist Body in the Economy of Cosmic Power

Where Do We Go from Here?

‹ Articles on Religion and Climate Change up Multimedia ›

How a letter by Pope Francis became a movement, a TED Talk and now a film

Pope Francis: Love for the poor and for the Earth must go hand in hand